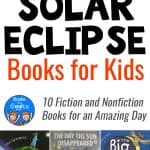 A solar eclipse is one of those rare events you want to make sure your kids remember. Read one of these solar eclipse books for kids to enhance their experience. 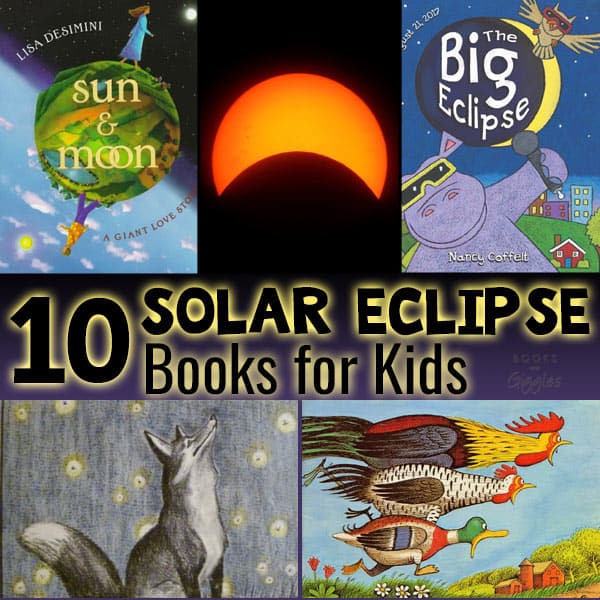 (Disclosure: Books and Giggles is a participant in the Amazon Services LLC Associates Program, an affiliate advertising program designed to provide a means for sites to earn advertising fees by advertising and linking to Amazon.com.)

I love using books to prepare kids for new experiences. When my twins were barely three, they were flower girls in their aunt’s wedding. A sweet little book helped them understand what to expect. (and they did great!)

An eclipse is kind of like a wedding in its importance, but more fleeting. The total eclipse coming up on August 21 will only last a couple minutes. I want my kids to understand and appreciate every second of it.

These solar eclipse books for kids can spark your children’s interest and imagination, as well as answer many of their questions. (I have to admit here – I needed a few eclipse books too! I’ve learned a lot researching this post!)

Several of my choices here are hard to find new, but available in libraries. A few others probably are too new to be in your library. Like I said — eclipses are a rare thing — as are eclipse books, apparently.

Someone Is Eating the Sun (affiliate) by Ruth A Sonneborn and Eric Gurney. Hen sees an eclipse beginning, and thinks that “someone has taken a bite out of the sun.” She runs to tell the other animals, one after another, with each joining her to tell the rest. Then they look up and see the eclipse – clearly illustrated stage by stage. When it’s over they celebrate. (I swear I remember this one from my childhood!)

The Day the Sun Disappeared (affiliate) by John Hamberger has a similar story line. The daytime animals are alarmed when it grows dark in the middle of the day. The night animals wake up and sleepily start “going about their regular business.” Then the sun re-emerges from the eclipse and the day animals celebrate its return, while the night animals return to their “cozy beds.”

The Big Eclipse (affiliate) by Nancy Coffelt is informative and fun. A hippo reporter, with an owl “eye in the sky” follow the total solar eclipse on August 21, 2017. Sidebars explain further, on topics such as eye safety, eclipses in mythology, and of course the astronomical facts. My kids were eager to read through this book with me. (Disclosure: I requested and gratefully received a e-review copy from the publisher.)

Sun & Moon: A Giant Love Story (affiliate) by Lisa Desimini. A boy-giant and a girl-giant live on opposite sides of the earth. The girl follows the moon around the nighttime side the earth. She’s lonely without any friends her size. The boy follows the sun because he’s afraid of the dark. You see where this is going.… An eclipse comes. The children meet and realize they’re “giants on the same planet.” The vivid, surrealistic illustrations drew my daughter into this book. 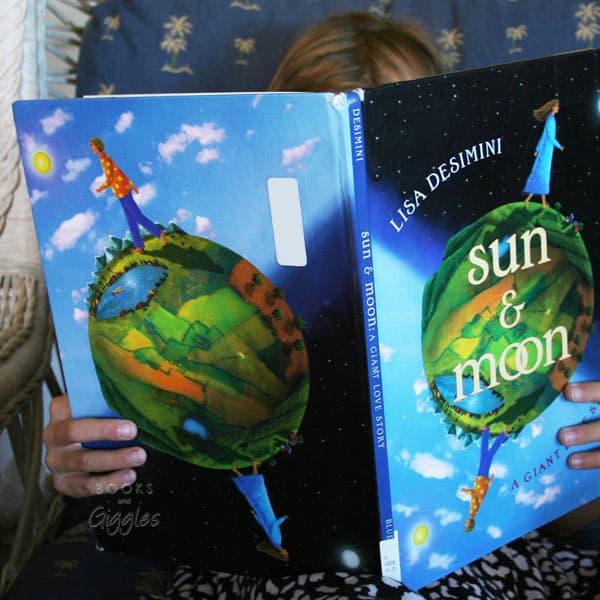 The Day My Dogs Became Guys (affiliate) by Merrill Markoe and Eric Brace. During an eclipse, a boy’s dogs turn into humans, but still act like dogs. The mayhem that ensues is sure to bring a few giggles. The focus is really on all the crazy things the dogs do, like eating an entire roast turkey and getting stuck under a bed. There’s not much detail about the eclipse, other than being the probable reason for the dogs’ behavior.

Sunpainters: Eclipse of the Navajo Sun by Baje Whitethorne. The story of a Navajo boy and his grandfather during a solar eclipse. I’m still waiting on a copy of this from my library, and will update my review here when it comes in. It sounds really good!

Where Did the Sun Go? Myths and Legends of Solar Eclipses Around the World Told with Poetry and Puppetry (affiliate) by Janet Cameron Hoult looks like a good choice if you’re interested in mythology of eclipses. I found this one too late to get a copy to review, but didn’t want to leave it out.

Every Soul a Star (affiliate) by Wendy Mass. Told from several points of view, this chapter book for upper elementary has well developed, interesting characters, and an eclipse at its center.

Eclipses (affiliate) by Nick Hunter is a detailed, fully illustrated nonfiction choice for elementary aged kids. It covers both lunar and solar eclipses, effects on wildlife, and even gets into eclipses on other planets!

Looking Up!: The Science of Stargazing (affiliate) by Joe Rao is a more general nonfiction early reader about observing the sky. The engaging text covers the sun, comets, constellations, eclipses, and more. It also has an extra section dedicated to the August 2017 solar eclipse.

I wish we lived nearer to the path of totality. Even with a partial eclipse here in Texas, though, we’ll be ready for those all important two minutes on August 21st. I hope you will be too!