As a mother of three, I should have known that you can never be prepared for everything.

While the kids happily ate pizza, I suddenly noticed that Sophie was missing a tooth! And by missing, I mean we had no idea where it was. 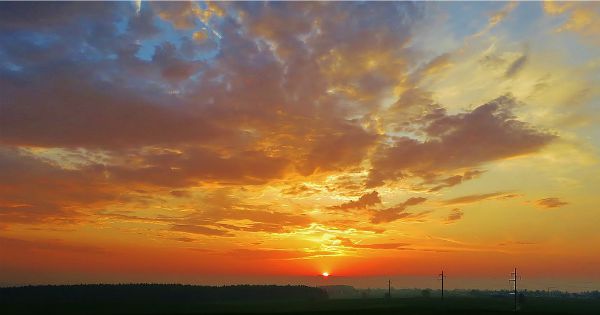 It was still morning, but it had already been a long day. We’d all awakened before dawn to take Liam to a kids’ triathlon.
My husband and I had each carried one still-sleeping little girl to the car. When they woke up, I passed back the egg burritos wrapped in aluminum foil. The kids devoured them and passed back the crumpled foil for me to throw away. I wasn’t thinking at all about loose teeth. My mind was on coffee and the road.
The brightening sky was clear, the wind still. For the first time since last spring, the early morning air felt cool enough for a light jacket over our shorts and t-shirts. The pleasant weather gave no hint of the little drama on my horizon.
Waiting on the race to begin, I let the girls play briefly on a nearby playground. My focus, though, was on Liam.
When the race started, we dashed back and forth inside the course, cutting corners to watch each leg of the race.
We were all over the place. 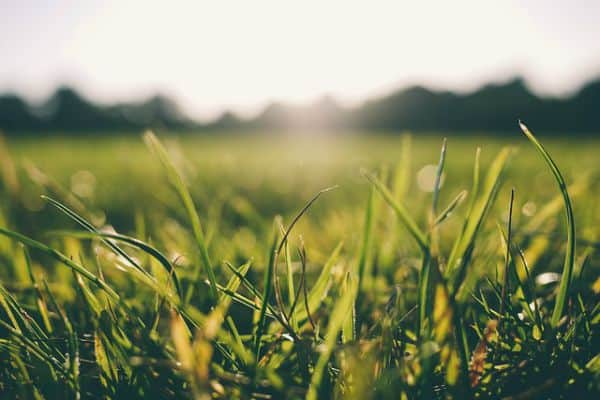 Sophie’s two bottom front teeth had been loose for a long time, but she’d been in no hurry to wiggle the first one out. In fact, she’d been eating less and was careful not to bite with the offending teeth. I was expecting to see one of them hanging from a thread soon, but so far they seemed to be staying put. Or so I thought.
This experience was so different from what I remember when Liam lost his first tooth. His became loose and fell out within 24 hours. I had to scramble to make him a tooth fairy pillow.
When my twins’ teeth started to wiggle last month, I got into high gear and made them each a glamorous tooth fairy pillow with sparkly fringe. I wanted the girls’ pillows to look just right, and more importantly, I wanted to be prepared.

After the race, we sat down in a grassy area, and the kids ate pizza. That’s when I noticed her tooth was missing, our tooth drama began.
Poor, sweet Sophie was devastated. I was almost as sad as she was. Her very first loose baby tooth – gone! My heart just sank into the pit of my stomach.
We looked around on the ground she was sitting on. We asked her if she remembered it feeling different at any time that morning. She didn’t. I thought about how tiny a baby tooth is, and I knew we wouldn’t be finding it if she’d lost it outdoors.
Still, Sophie needed reassurance.
“Maybe it fell out in your bed last night. We’ll look when we get home,” I suggested.
Later in the drive home, she still had the tooth fairy on her mind. “I wonder what the tooth fairy does when a child can’t find her lost tooth,” I mused.
Liam was less than helpful. “She doesn’t give you any money if she can’t find the tooth.”

He spoke from experience – except his problem had been that he’d put his tooth somewhere that the tooth fairy couldn’t find in the dark. She’d left him a note asking him to please put his special pillow on the bedside reading chair. The next night, she retrieved the tooth and paid up.

Looking for a Missing Tooth

Clearly, it wasn’t going to be as simple with Sophie’s missing tooth. We managed to cheer her up with optimism about finding her tooth, but I was secretly worried. I needed a backup plan, but I couldn’t think of anything.
On the way home we stopped for lunch. While the kids were busy eating (because, apparently, triathlon days are really all about eating), I ducked back out to the car.
I was certain the tooth would be in a ball of foil in the car trash can. It just had to be. I needed it to be.
So I did what any sane, sleep-deprived mama would do. I un-crumpled every ball of foil in there. I had so convinced myself that I’d find the tooth in that foil, that I couldn’t believe it when it wasn’t there. I stepped back into the restaurant, looked at my husband, and just shook my head “no.”
When we finally arrived home, before the kids noticed, I headed up to the girls’ room. “It must have fallen out in her sleep,” I told myself. But apparently it hadn’t.
I needed a new plan.

“I think we should write a note to the tooth fairy,” I announced. “Maybe she’s dealt with this problem before.”
“But Mommy, she won’t come if I don’t put a tooth in my pillow,” Sophie fretted.
I prevailed on her to try anyway, so we wrote a “Dear Tooth Fairy” note and put it the pocket of her
tooth fairy pillow.
Fast forward to the next morning.This is the note she found in her pillow, tucked around a
dollar bill. 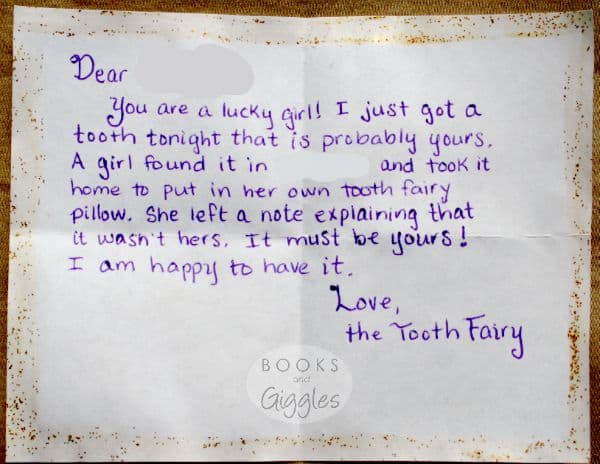 (Her name is whited out because Sophie is her play name, not her actual name).

Sophie bounded downstairs with it, eager to show me what had happened. She smiled a big gap-toothed smile, and said, “Look, Mommy! The tooth fairy did come!”

Now that’s the kind of drama I love in the morning. Later that day, with very little convincing, she twisted the second loose tooth out.

Isabella has yet to lose her first tooth, but I can pretty much guarantee you she’ll be keeping good track of it. So will I.